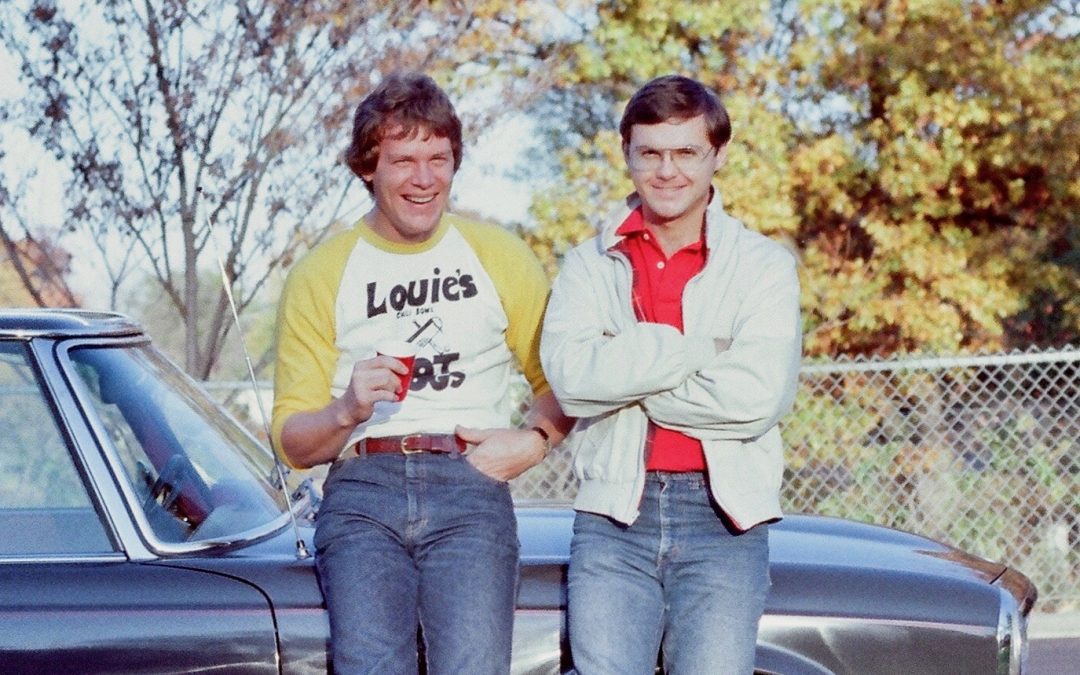 My dear friend died of a heart attack on Interstate 40, September 14, 2017. This is the eulogy I delivered at Faithbridge Church in Spring, Texas, October 5.

I thought I was Lou’s only friend. That is how he made you feel.

We meet in 1974 a few years after he had recovered from cancer. His medical team advised if he lived two years he had a good chance of living a long life. Lou considered every day a gift. He was always enthusiastic, brought great joy to my life and to everyone he met. Like me, Lou was raised in a military family. We inherited the hairstyle. In a military family you learn to make your bed and to take a stand. You place high value on tradition, loyalty and being of service to others.

We never had an argument, but then we never dated. Lou and I agreed on most things, like how to address a woman. You can never go wrong with “your highness.” His nickname was “Captain America” for obvious reasons. My mood is usually serious, or at least Gothic-adjacent, except when I was in Lou’s presence. He called me “Smiley.”

Through the years we shared many memorable adventures: boating at the lake, OU game day at Lou’s campus corner restaurant Louie’s Chili Bowl (a hot dog you can trust), his nightclub Zanzibar that showcased his love for 70s Soul music. One weekend in Norman in the early 80s Lou suggested we watch Caddy Shack. He had no beer in his house. Drinking wasn’t his thing so we binged on milk and Hostess Twinkies. Our theme song was “Born to be Mild.” When I returned to Tulsa I mailed Lou a note and a case of Twinkies. We laughed about that for years.

Lou and I spoke two or three times a week through good times and the inevitable valleys that seemed to never be as dark for him. For Lou the glass was always half full. He was the first person I would call about anything. If either of us was taking a long road trip it was our tradition to call the other, usually late at night when we were growing tired. We shared everything worth sharing and laughed how our friendship saved a bundle on psychotherapy.

For several weeks Lou had been speaking about his trip to Santa Fe for his 50th high school reunion and how he was excited to reunite with his classmates. We agreed he would stay the night with me in Oklahoma City on his way. We had a great time at dinner with some of my high school friends. Lou had lamb chops. “It was delicious,” he said. The next morning we had granola, shared a few laughs and made plans for him staying over the following week on his way home. The Oklahoma State Trooper called me from his phone a few hours later. I was his last call.

After I recovered Lou’s belongings from his car I drove west to Oklahoma mile marker 14, near the Texas line, where the Trooper said Lou had left the road. I wanted to see what Lou had seen and there it was: Wide open country. Green rolling hills. A cloudless blue sky, a highway heading off into the horizon, into the promise of a tomorrow that may never come.

Over the last four years Lou had been a source of strength when I lost my brothers so I was eager to be there for Louis and Landon and Jeanne.

Aside from the obvious things in Lou’s car I found a few items that stood out, a pack of Aviator playing cards and three fortune cookie fortunes that summarized his worldview: “You may accomplish more by being direct.” “Your efforts will be worthwhile.” And “A cheerful letter or message is on the way to you.”

I would have kept those fortunes, too.

I found copies of the letters he wrote to his sons Louis and Landon on their 21st birthdays, beautiful affirmations of his love and, as he told me countless times, his greatest accomplishment. “Until you were born,” he wrote, “I never experienced a love so intense…that I would lay my life down for you and your well-being at any time.”

Lou’s passion and his purpose were to befriend, encourage and inspire others. It will be difficult for me today, but I will live my life to be more like Lou. I will pursue my dreams and do my best to smile as if I was looking at him.

When I reached mile marker 14 the sun was setting, the time of day when the light is most spectacular, an irony not lost on me. I stood there for the longest time. Cars and trucks roared past. The Oklahoma wind graced my face. I stood there until it became clear to me, until I was certain Lou’s last thoughts were of Louis and Landon and all the joy one life can know.